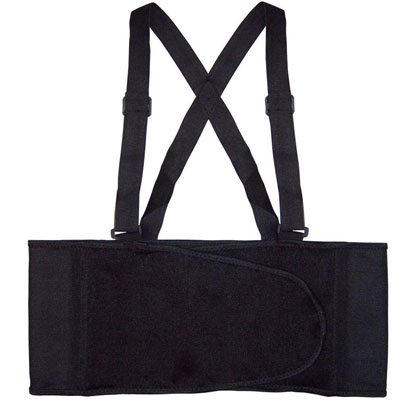 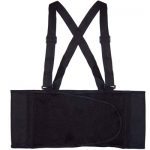 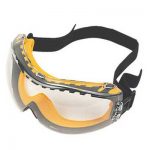 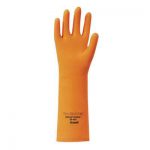 What is a back belt?
Back belts, also called “back supports”, “lumbar support belts”, “weight lifting belts”, or “abdominal belts” were originally used in medical rehabilitation therapy. Leather belts have also been used by athletes during weight lifting. The “industrial back belt” has also become popular. While there are many types of belts on the market, the most common style is of a lightweight, elastic belt worn around the lower back which is sometimes held in place with suspenders.

Why are people using back belts?
A back belt is a device used, in theory, to reduce the forces on the spine, increase intra-abdominal pressure, stiffen the spine and reduce loads during lifting. It is also advertised that by wearing a back belt, the worker will be reminded to avoid awkward postures and heavy loads, reduce bending motions and in the end, reduce injuries in certain workplaces.

Do back belts protect workers from back injury?
In spite of anecdotal claims, no evidence has so far been found to support the claim that wearing back belts improves one’s back safety, nor reduces the risk of back injury. The National Institute for Occupational Safety and Health (NIOSH) in the United States formed the Back Belt Working Group to review and evaluate the existing data related to back belts. Their final conclusions are:

None of the studies reviewed could show that the use of a back belt significantly reduced the pressure on the spine during a lift.
The use of back belts limits mobility and may reduce the suppleness and elasticity of muscles and tendons, potentially contributing to back injury.
The use of back belts may create a false sense of security, increasing the risk of lifting excessive loads.
With these recommendations in mind, the Ontario Ministry of Labour issued “Back Belts in Manual Material Handling” that warns users and potential users of any kind of back belts about the potential health risks that could result from wearing these devices. They state that the ministry “does not recommend back belts as personal protective equipment for workers engaged in manual materials handling”.

Note: These recommendations may not apply to use of back belts during rehabilitation from injury. Consult with your medical professional.

# Worker Back Support Belt in Bangladesh

There are no reviews yet.

Be the first to review “Worker Back Support Belt” Cancel reply